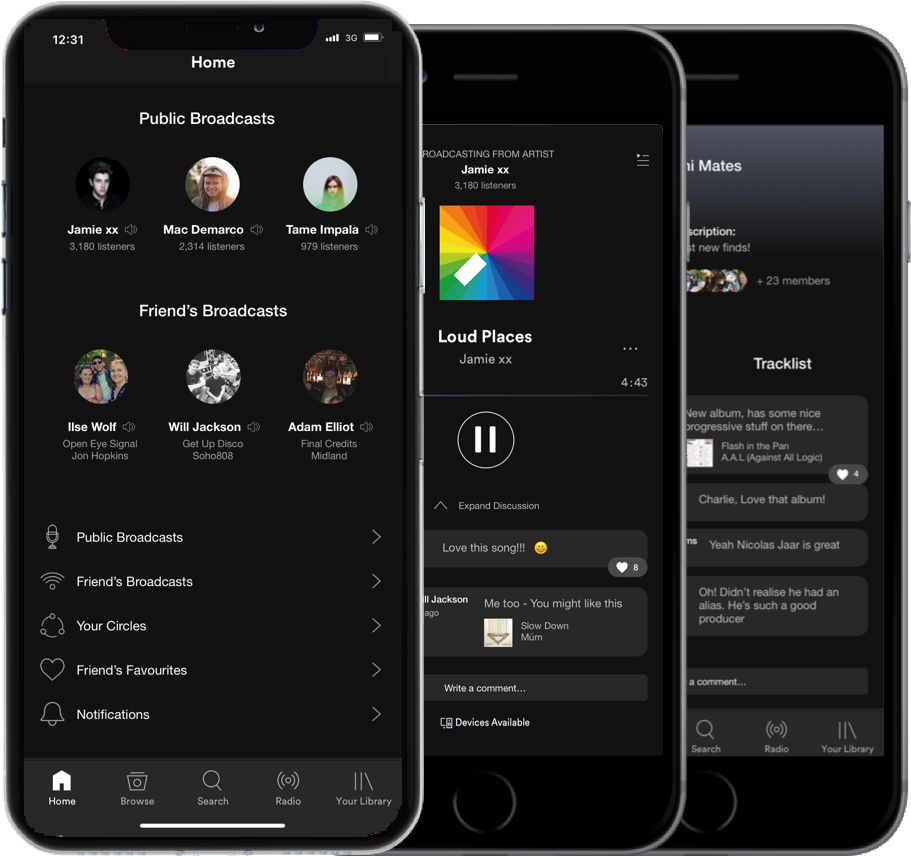 Spotify is looking to expand on its social capabilities to improve retention and engagement in the app by designing a new social feature to be embedded in the platform.

Spotify recently redeveloped their brand, with the goal to create a look that would signal to the brand’s core audience of millennials that Spotify was more of an entertainment brand, as rich and lively as the music culture it fronted, rather than simply a technology service that served up songs.

This project was completed as part of DesignLab's UX Academy course.

There are already a number of social products in the digital music space, each with their own niche. The challenge lies in creating a unique set of social features that users want to interact with and add to the Spotify experience.

By having a deep understanding of user behaviour and applying a design sprint methodology with regular feedback stages, ideas were rapidly developed and validated.
View Prototype
Project Duration: 80 hours

To understand the current platforms available for sharing and learning about music.

To empathise with those who listen to a lot of music and understand how they currently listen to, share, discover and organise their music, their frustrations and desires as well as their experiences with live music events.

To understand which product features would be valuable to Spotify users.

Market research revealed some compelling statistics about Spotify's users, namely 72% of the 140 million users are millennials, and 68% of streams take place on phones. There are a plethora of services catering to music, including to a very large extent, Facebook and YouTube, which are used for music events, groups and related videos.

5 participants were interviewed (4 male and 1 female) over two phases, 4 of whom are millennials. They are all people who listen to music regularly and attend live music events, one of whom is a music producer.

Research revealed that participants often prefer to interact with and share music through a vast array of different platforms, products and services, including services not dedicated to music such as Facebook and YouTube. Users prefer sharing YouTube videos over Facebook messenger than sending 30 second Spotify samples.

It was also found that all users enjoy sharing their music digitally with a small, exclusive groups of friends but not all users interacted with comments and discussions. An opportunity was identified in notifying users of new releases, whether from artists they listen to or the corresponding labels.
“
[Music] is like air electricity and water. It's just becoming available to everyone.

The entire reason I use YouTube is for the comments, they're just interesting and funny - Someone will ask for recommendations in the comments and you'll get 10 people recommending songs that no algorithm would be able to produce.

I've always wondered what all the biggest DJs listen to in their spare time.

I wish I did follow labels - For example if Spotify asked if I wanted to be updated from a label I was listening to I would use that.

“At the moment there's a lack of information about songs and the people behind them. I always loved interacting and learning about those details of a song, oh it's the same producer as this or that. It's confusing to me why they don't let you see the producers and labels at some level. The information is there at the source they just need to show it.”
"

Based on the interviews, an empathy map was created to surmise the qualitative opinions of users. 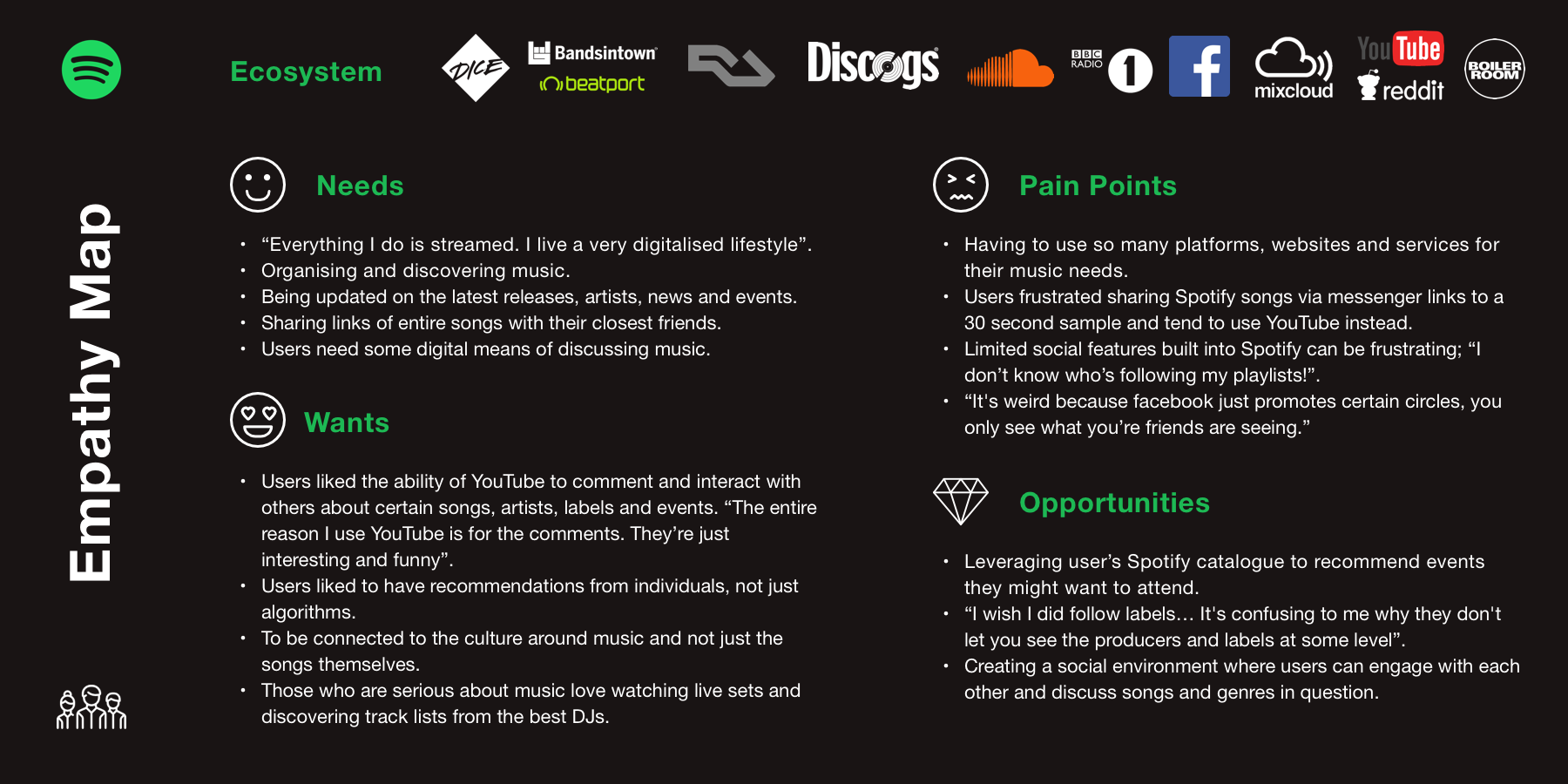 Interviews revealed that Spotify users sat somewhere on a spectrum between being entirely involved in the industry, events, DJs and culture of music to simply being passive consumers of songs.

It is important that social features cater to the needs of all users, and as a result two personas were created to represent the needs and outlook of the different user groups. 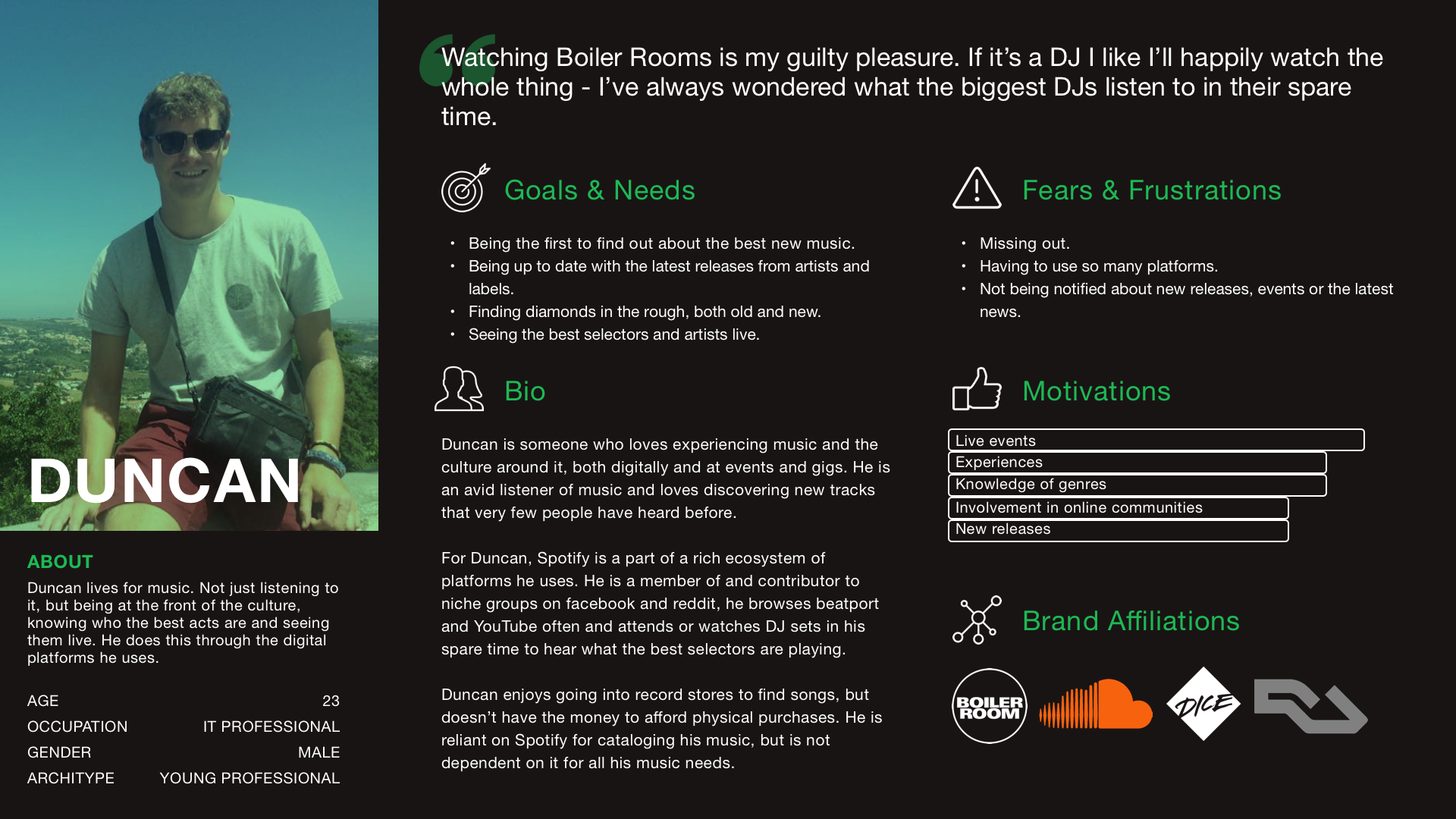 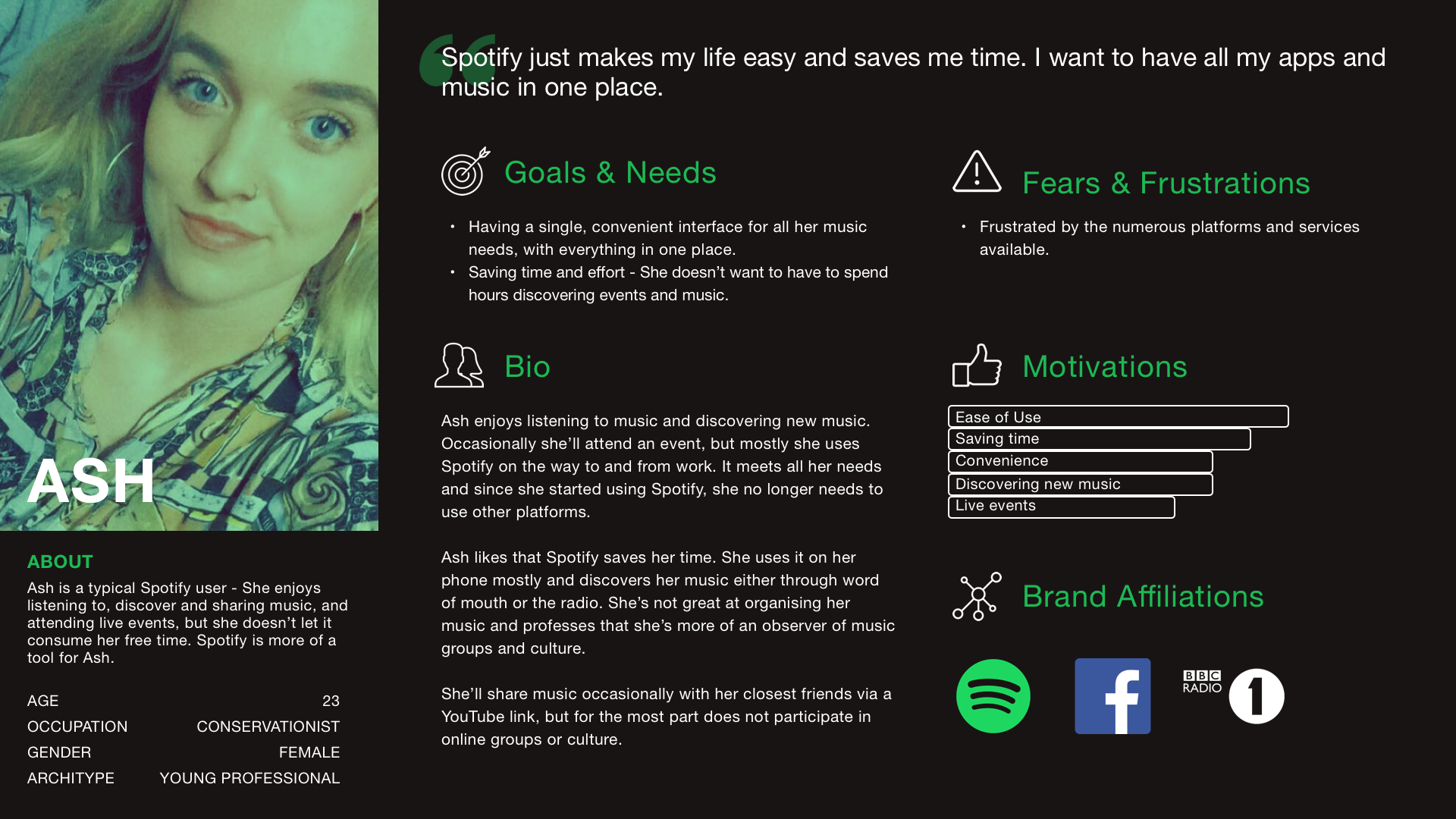 Reviewing the above research artefacts, a number of problem statements were created to fuel the coming ideation phase of the project. Four of these were chosen to be developed further:

How might we open discussions between the 140 million users of Spotify?
How might we bring back a sense of community and value behind songs?
How might we directly connect creators and consumers?
How might we ensure users never miss out on the artists and events they love most? 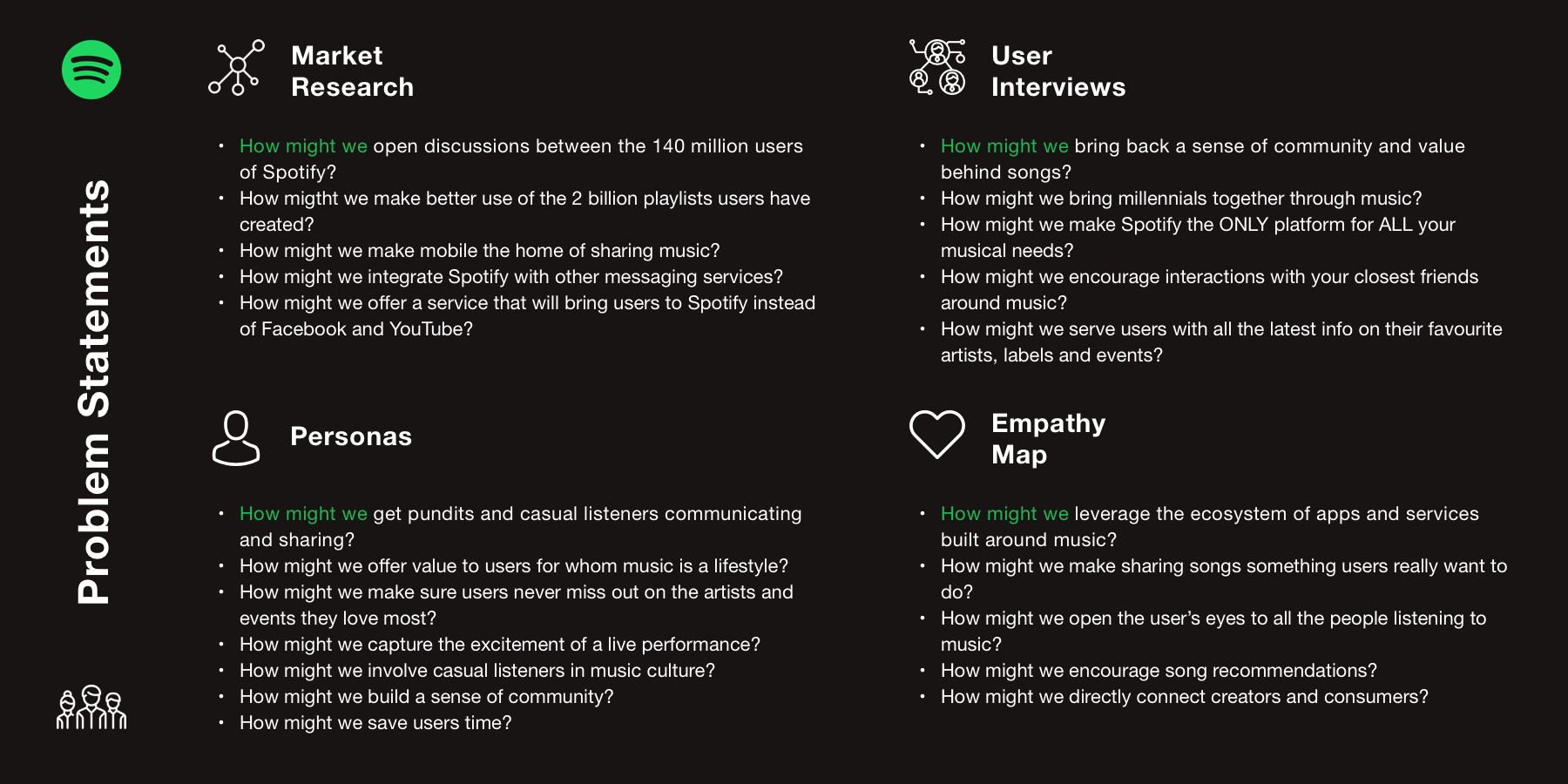 Each of the chosen problem statements was used to ideate in rapid sprints. For each statement, 5 minutes were spent filling an A3 side with 8 concepts or ideas. With approximately 40 ideas, the best of these were then storyboarded in more 5 minute sprints and developed into user flows. 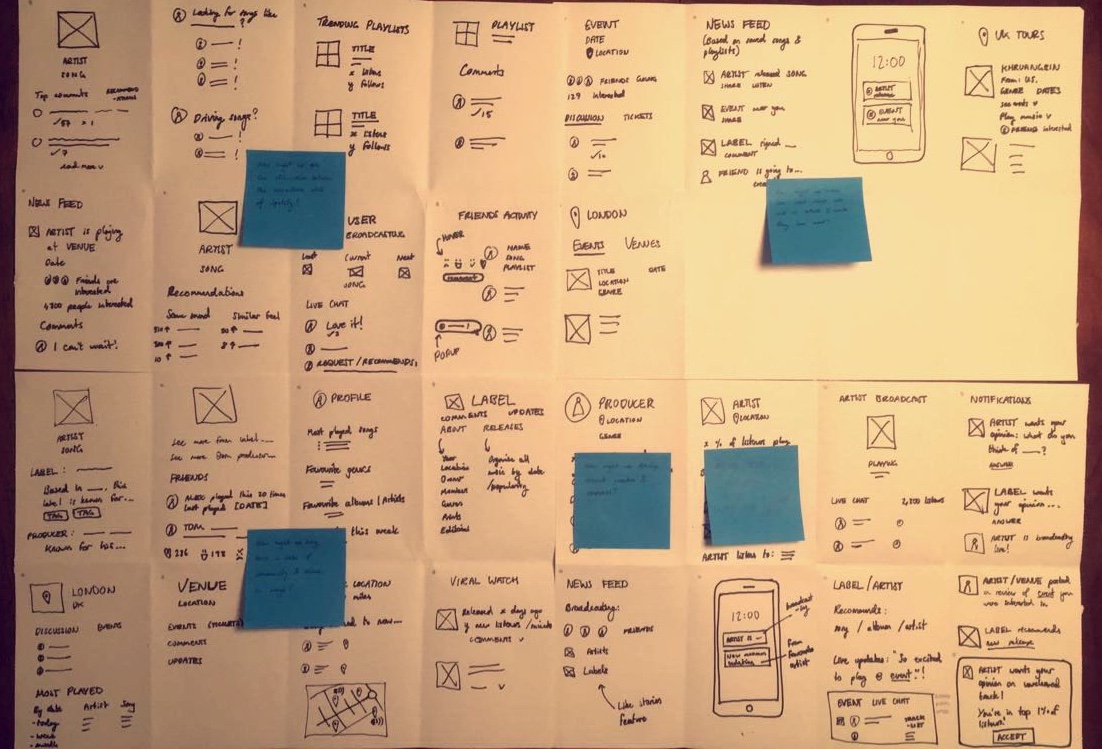 3 millennials who are heavy users of Spotify were shown the storyboards and asked to comment on which they believe would hold the most value for them.

To receive feedback so early on proved indispensable - To be able to validate or discard ideas after such a short amount of time is a joyous thing for a designer.
“
Not so sure about the venues. There’s other apps for that like DICE and RA.

I’m not sure on commenting, it’s a bit soundcloudy.

Live streaming is a straight up 10.

Broadcasting would be dope for sure.

I don’t like the idea of comments on a song. The comments on YouTube videos are pure gold, but don’t think it would work for Spotify.

I think friend circles and groups has potential too.
"

The best ideas from the ideation process were then pieced together into a paper prototype, which could then be tested with users to gauge and validate the ideas. The prototype can be viewed here.

The challenge arose of how to integrate these features seamlessly into Spotify. As there are near to zero social features in the mobile app, it made sense to house them under one menu screen.

In the research phase, participants cited low engagement with the homepage, which consists of algorithmically generated recommendations based on your listening habits. Considering this, it made sense to move this content under the 'browse' tab and dedicate the homepage to social interactions, live streams and notifications.

2 millennials who are heavy users of Spotify were shown the paper prototype and asked to comment on the features, layout and usability.
“
I really like the broadcasting idea with artists, so you can see what your favourite artists are listening to, that’s great.

I do like the redesign of the homepage I think that’s really valid, I never use the homepage. I would say I spend 99% of my time between search and my library.
"

Once the user flow was established and validated, the screens could be wireframed in Sketch. 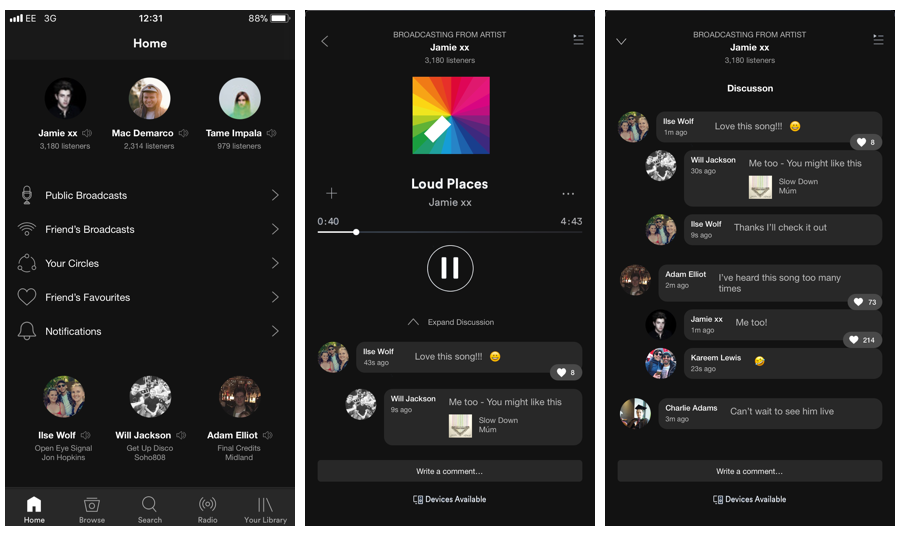 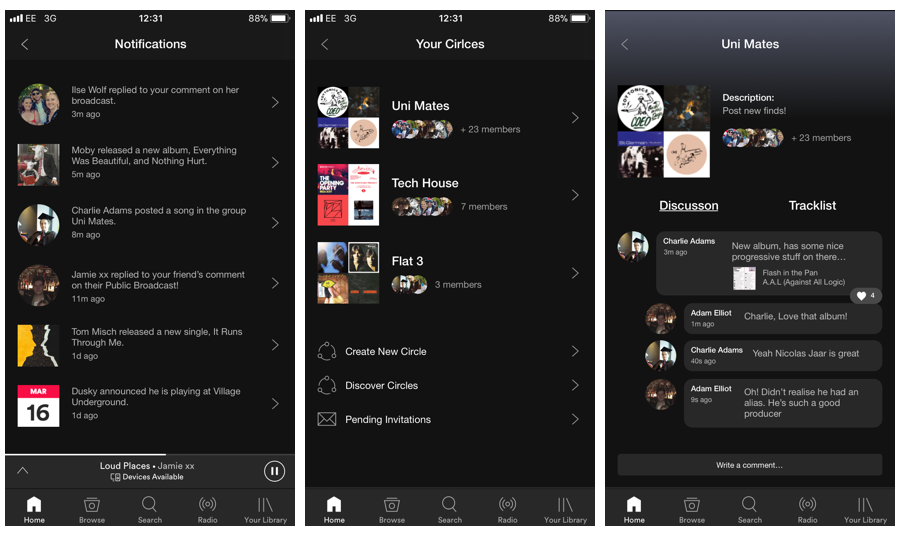 With the screens created, the user flow could be prototyped in invision and is available here.

It was quickly discovered that having every feature available in one menu screen was confusing and gave rise to complications with hot-spotting and navigating the prototype. Users were also unsure of what the features did before trying them.

To solve these problems, a Usability Testing menu screen was implemented that funnelled participants into testing a single feature. The results of the proceeding usability test is below.

“
I like 'your circles', because it adds a personal touch to listening to music. For me I would want that at the top, that's the best thing for me.

I really like the broadcasting idea with artists, so you can see what your favourite artists are listening to, that’s great.

This project was heavily research based and it was really satisfying diving into the mindsets and behavioural patterns of different user groups.

This project uncovered two very important lessons. Firstly, at the early stages of ideation, a breadth of ideas and a divergent mindset are extremely powerful when coupled with user feedback. In the space of an afternoon, several dozen ideas can be generated and validated as either exciting or a waste of time.

Secondly, the purpose of a prototype is not to mimic a finished product, but to test a specific user flow. It is important to bear this in mind when creating screens, so specific ideas can be tested in isolation.

Honest recommendations from those you trust. 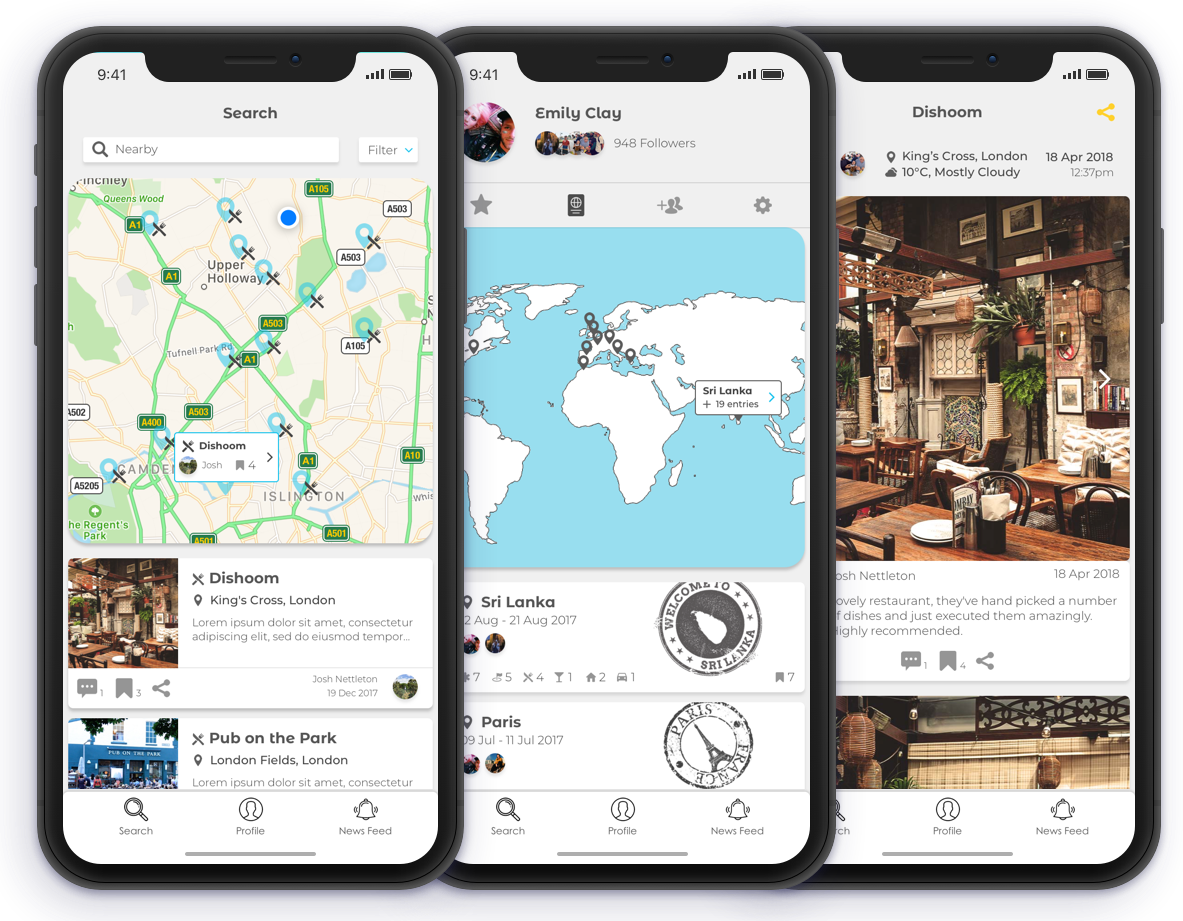